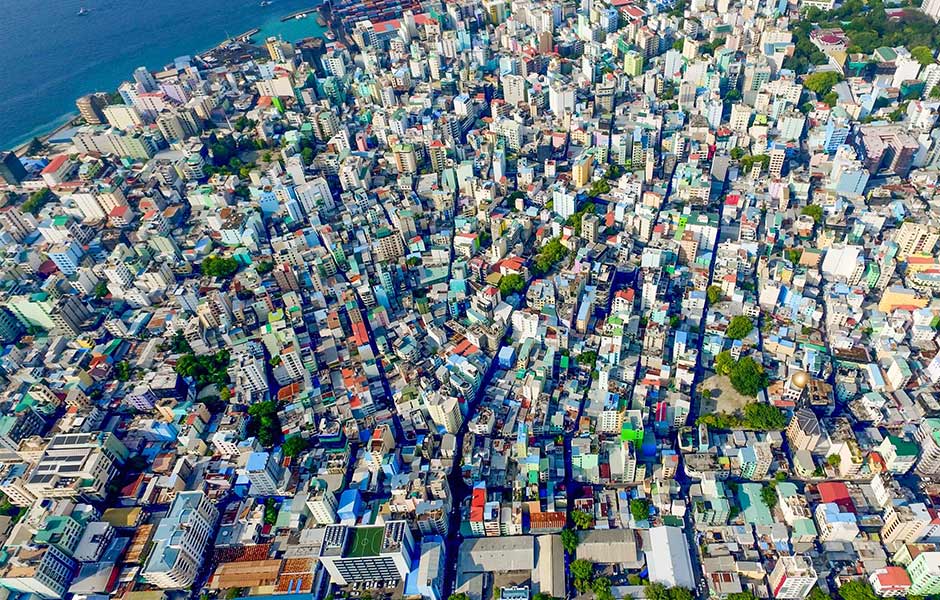 The share of Canada’s growing population made up by immigrants has risen to 21.9 percent, up from 20.6 percent in 2011, and the majority of recent immigrants arrived through an economic immigration program.

These are just a couple of the many insights published by StatsCan, based on data gathered in last year’s census. The immigrant population is defined as persons who are, or who have been, permanent residents in Canada. Immigrants who then went on to obtain Canadian citizenship by naturalization are included in this group.

Today, 7.5 million immigrants are spread across the country — and despite the fact that Toronto, Vancouver, and Montreal still attract more than half, more immigrants are choosing to settle in the Prairie provinces and Atlantic Canada. Government projections show that Canada’s immigrant population may reach as high as 30 percent by 2036.

Number and proportion of foreign-born population in Canada, 1871–2036 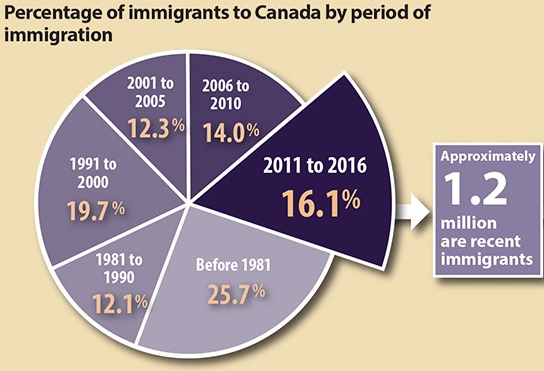 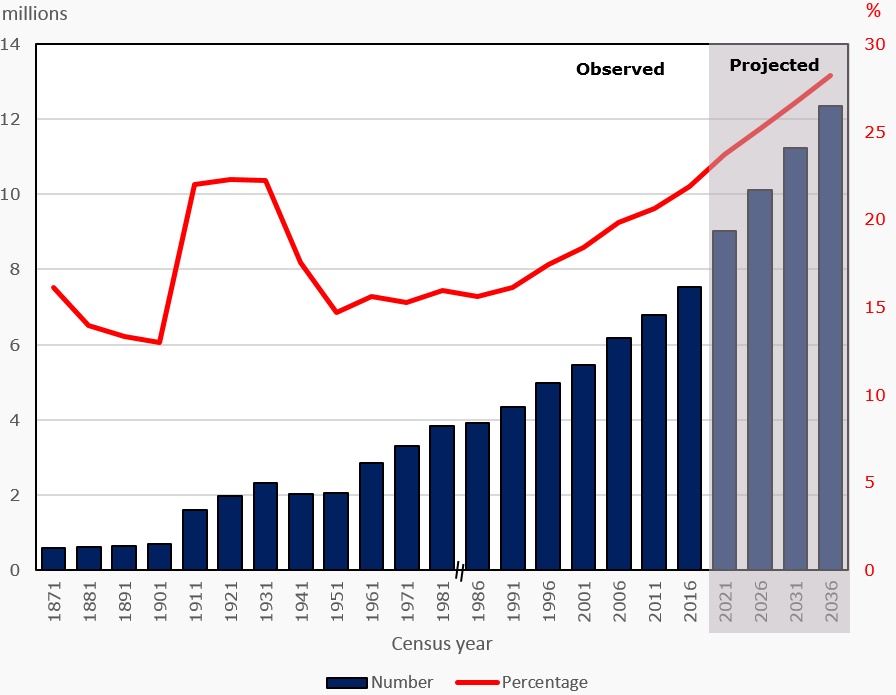 Source: StatsCan (Note: // represents a break in the historical series)

Immigrants’ backgrounds have also shifted over time. Whereas decades ago the main sources of newcomers to Canada were Europe and the United States, the latest figures reveal that 61.8 percent were born in Asia (including the Middle East). No fewer than seven of the top 10 source countries of new immigrants were Asian: the Philippines, India, China, Iran, Pakistan, Syria, and South Korea. 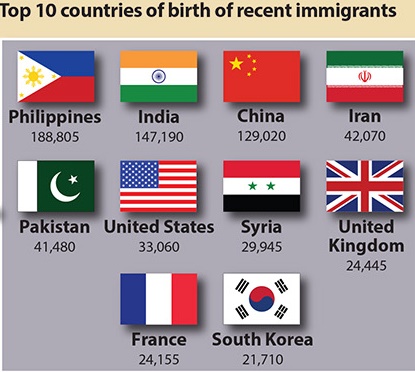 The census also shows that more than three-in-five immigrants (60.3 percent) who arrived between 2011 and 2016 were admitted through an economic program. A further 26.8 percent arrived under the Family class having been sponsored by a close relative, spouse, or common-law partner, and 11.6 percent were refugee. Around a quarter of all immigrants admitted in the first five months of 2016 were refugees, far higher than the general trend due to the government’s effort to quickly resettle displaced Syrians.

Economic arrivals are welcomed because they have the proven capability to settle into the Canadian labour market. Canada’s internationally-praised economic immigration system has undergone an overhaul during the period since previous figures like these were last released in the National Household Survey of 2011. In January, 2015, Canada’s main economic immigration programs moved from a first-come, first-served model to the Express Entry system, which allows the government to invite eligible candidates to apply for permanent residence on a priority basis. With Express Entry, Canada can bring in more of the world’s best and brightest, while also managing the supply of applications, thereby reducing processing times to less than six months in most cases. 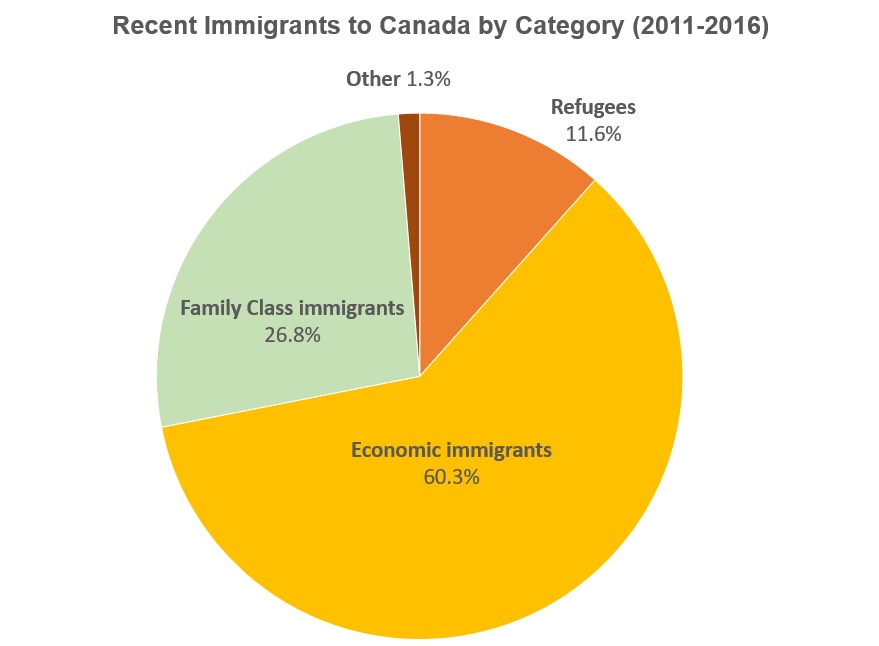 As more immigrants settle, communities across Canada are benefiting from their energy, expertise, and skills. Traditionally, most newcomers to Canada settle in one of the three largest cities: Toronto, Montreal, and Vancouver. This remains the case. In 2016, immigrants made up 46.1 percent of Toronto’s population, 23.4 percent of Montreal’s, and 40.8 percent of Vancouver’s.

However, cities and communities in the Prairie provinces (a regional term that includes Alberta, Saskatchewan, and Manitoba) are receiving higher proportions of the overall number of newcomers than before. For example, Winnipeg, the capital of Manitoba, attracted 4.3 percent of immigrants between 2011 and 2016.

Other cities in the Prairie provinces that have witnessed an increase in immigration settlement include Regina and Saskatoon in Saskatchewan, as well as Calgary and Edmonton in Alberta. Immigrants are increasingly attracted to these destinations for the employment opportunities and high living standard, among other factors.

According to the government, the way in which some provinces and territories use their Immigration programs to attract new immigrants, is one of several factors that can explain changes in the geographic distribution of newcomers to Canada. More than half of new immigrants living in PEI, New Brunswick, Manitoba, Saskatchewan, and Yukon were admitted through a PNP. Nationally, 16.4 percent of all recent immigrants or 27.3 percent of economic migrants, arrived through Provincial nominee programs.

Though Ontario remains the most popular province for recent immigrants, with 39 percent of them residing there, this figure is down from 55.9 percent as recently as 2001. It should be noted that overall immigration levels have increased over this period, and so rather than it being a case of fewer immigrants residing in Ontario, it is more a case of an increasing number of newcomers choosing other destinations. Indeed, despite the fact the overall share of recent immigrants choosing Ontario has decreased so far this century. 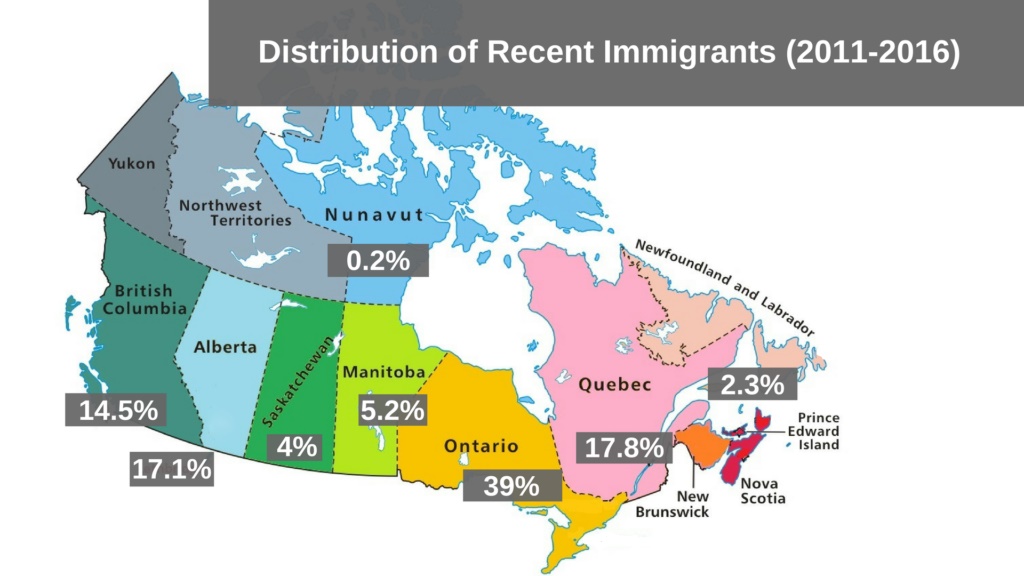